The Script is the Thing. The Proof is on the Page.

A poor script will sink your project before your get started.

A great script can make EVERYTHING happen for you. It’s the ultimate calling card. It can open doors you never thought possible. Or keep doors open you cracked with a pitch and now can back up and close the deal with a solid script.

And make no mistake, if your project is a drama, sit-com, sci-fi or animated, it’s not going anywhere without a script.

The first thing a network executive will ask for once she’s heard the pitch or seen a treatment and are interested in your project is… “Let me read the script.” You’ve got to have one. It’s the only way they can tell how the show plays – the story, the tone, the structure, the pace, the characters, the dialogue, the drama, the humor, the
pay-off – it all HAS to be there in that pilot or sample episode. 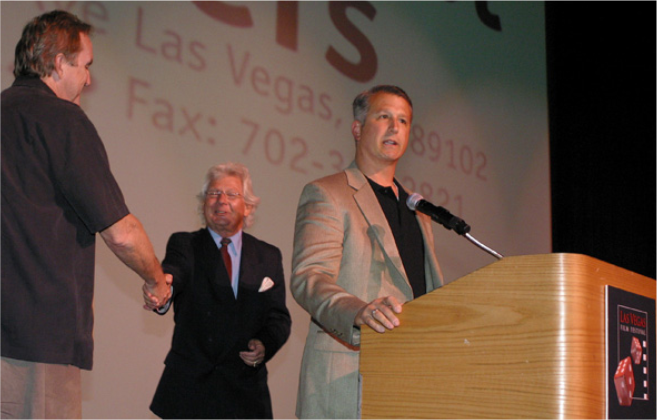 But maybe you have a great idea, but don’t have the skills yet to deliver a first-rate script. That’s okay. Your idea can still come to life in the best form possible.

We can write the script for you. Or even collaborate on the script so that you are learning the process as you contribute to the construction and writing of the script. You still own everything, but your idea gets a professional script right out of the gate and the best possible chance to succeed.

Scripts we have written or co-written for show creators got them agents, got them key meetings, got them attention, won them awards and got them deals.

Our client Rick Brandelli accepting his First Place Script Award at the Las Vegas Film & TV Festival. His script was written by our head writer Wayne Carter, left, who joined him on stage.

A one-hour drama pilot script “Sunset Fire” co-written with a veteran firefighter,Rick Brandelli, but who was a novice writer has already won awards in more than 16 film festivals around the world, including First Place at the Las Vegas Film Festival.

If a producer has a big stack of screenplays on his or her desk and they have limited time, which one do you think they’re going to grab off the stack first? They’re going to grab the one that’s already been tested in the marketplace and won awards.
Those wins are priceless publicity to demonstrate the quality and potential popularity of your show concept as a series ripe for television.

Those wins are trophies you can point to, put on your one-sheet, and gain confidence for when you walk into a pitch with network executives or producers.

Selling in Hollywood is all about HEAT. Agents and executives respect HEAT above all else, because no one can predict a show that will sell and become a hit. The next best thing is a script that’s already proved its popularity, quality and success.

That’s HEAT, baby. And we can help you get it.

Our industry veteran writers can write or co-write a top quality script for you that will serve your project better than anything you can imagine. We’re happy to provide samples in every genre, from half-hour sit-com pilots, to one hour drama pilots, to two-hour feature films.

See what a great script can do for you and your project.